Le Cellier, located in Epcot’s Canada pavilion has been one of the most popular restaurants at Walt Disney World for the past couple of years. While Le Cellier’s status as the “hard to get ADR” (advanced dining reservation) has diminished slightly since the opening of Be Our Guest, it is still worth looking for an ADR if you plan on dining here.

We almost always opt for lunch at Le Cellier simply because there are usually more reservations available earlier in the day. and it is not a restaurant where dining at lunch vs. dinner will really make a difference. Le Cellier is now considered a signature dining experience, so you won’t find much of a difference in price between lunch and dinner either way. 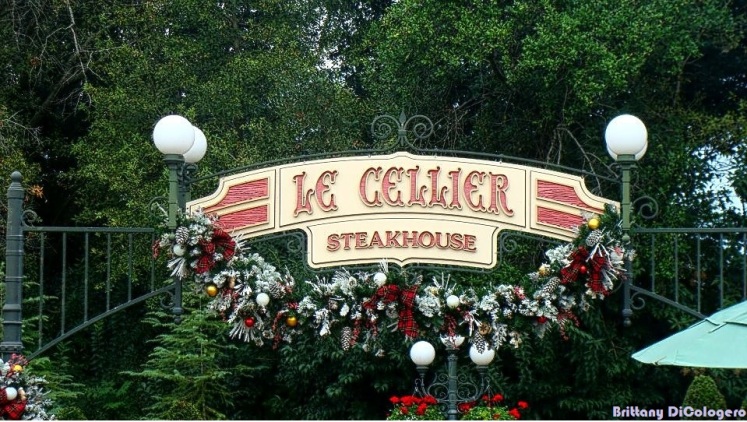 Before getting to the food, Le Cellier’s location is worth discussing. The restaurant is set back far enough into the Canada pavilion that many guests walking by might not even notice it were it not for the archway near the gardens that bears the restaurant’s name. (Although to be fair, many guests do not even realize there is a movie or gift shops in the Canada pavilion, so comparatively the restaurant is pretty well-recognized).

On our most recent visit, we were slightly early for our reservation, and we were invited to sit just inside the doors in front of the host station to wait for our table. Inside, guests are offered ice water while waiting for their tables, and on our most recent trip we were offered complimentary cheese and cold cuts on small, individually portioned plates as well.

When we were seated, our waitress explained the theme of the restaurant, and how each room was designed to serve as a different region of Canada. Of course, I can’t recall which section we were seated in, as I was probably too busy thinking about the cheddar cheese soup… speaking of which: 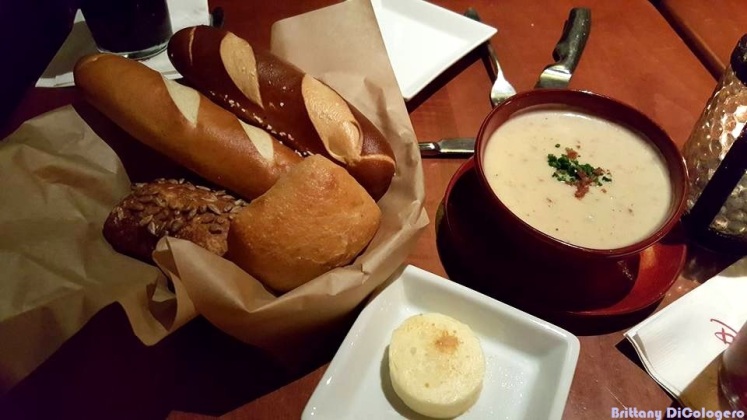 The Canadian Cheddar Cheese Soup, made with Moosehead beer and Nueske’s applewood-smoked bacon is one of the standouts on the menu at Le Cellier. In fact, we’ve never tried any other appetizer because we always end up getting the soup. Maybe next time we’ll order one more appetizer and share it, you know, for research. The soup is best served with pretzel bread on the side, or even better dipped into it. Because we primarily use our soup as a dip for the pretzel bread, we only order one bowl, however if you are looking to actually eat the soup with a spoon you’re better off ordering a bowl per person. Also keep in mind you can request that you only get pretzel bread in the bread basket.

Following the bacon-cheddar theme we’d started, we ordered the Bacon-Cheddar Poutine as a side to both of our meals. Le Cellier’s Bacon-Cheddar Poutine is made with Canadian Black Diamond cheddar sauce, Neuske’s applewood-smoked bacon, and is kind of the poutine alternative to the soup we’d already ordered. It’s probably equally as delicious as the soup, however for the sake of variety I would probably suggest going with a different kind of poutine if you do order the soup. The signature poutine, which features truffle oil and a red wine reduction is my personal favorite, which we would have ordered if it weren’t for Chaz and his strange dislike for truffle oil.

Onto the entrees, Chaz ordered the Seared Canadian Bison Strip Loin, which came out extremely rare just as he had ordered it. I’m not really interested in trying to different kinds of meat, but he said it was very good and he’d order it again, so we’ll have to take his word for it. The bison strip loin also came with some vegetables on the side, however if you’re looking for a heartier portion you’ll definitely want to order either poutine or an extra side dish at Le Cellier.

My entree was the signature dish, the Le Cellier Filet Mignon. I know a lot of guests rave that Le Cellier has the best filet mignon in Walt Disney World, but I’m going to set the record straight: Le Cellier’s dish is amazing, don’t get me wrong, but the best? If we’re being honest, Le Cellier is slightly better than the others because the mushroom risotto it sits on top of makes the entire meal and is absolutely incredible. If it weren’t for the mushroom risotto, the best filet contest would end in a three way tie with Le Cellier, the Yachtsman Steakhouse, and the Hollywood Brown Derby, duh.

No desserts yet from Le Cellier, but we’ll keep you updated when we try some! 🙂

All in all, Le Cellier is one of our favorite restaurants in World Showcase, and we probably dine here about once every other trip or so. The atmosphere, service, and food are always exceptional at Le Cellier, and we usually can’t think of a reason to skip it if the possibility of dining there comes up. I would say that for me personally, the biggest competition for Le Cellier is the Yachtsman Steakhouse, which with its location at the Yacht and Beach Club Resort is really just a short walking distance away from Le Cellier. Which restaurant I decide to go with really depends on my mood at the time. They’re both delicious, but if I feel like winding down, and leaving the parks for the day, or getting dressed up and going to Jellyrolls that night, the Yachtsman is the winner. However for a signature restaurant if you are planning on staying in the park, Le Cellier is a solid choice that you can never go wrong with.

We give Le Cellier a 9o% score, adding points for unique and delicious options, especially considering how much variety there already is in World Showcase, but deducting points because $52 for steak in the park (not that it isn’t worth it, it’s just a lot…)

This site uses Akismet to reduce spam. Learn how your comment data is processed.

It’s Britt! I started Castle Party as a way to build a community of Disney fans and share experiences both at the parks and at home. Join the party by using #castlepartylife!
Learn more here.

🌴 sharing Disney magic from the parks & at home ✨
#castlepartylife

Maybe a stretch for #SpaceshipEarthSunday, but Flo

Happy Valentine's Day from me and my one true love

Missing Streets of America this #NationalUmbrellaD