About once a year I come down with the second (or first depending on the severity) worst illness I tend to have when I am sick: the dreaded chest cold. Whether it’s the kind of chest cold that primarily leaves you with the sniffles and a little cough, or the kind where your chest becomes too tight to have any kind of productive cough, this cold is not a good time.

Since this sort of cold is apparently my body’s go-to once a year or every other year reaction to the weather changing, I’ve had plenty of experience in trying different ways of kicking it. If you find yourself coming down with this unfortunate sign of a change of season, give some of these tips a try:

Fluids and lots of them!

I’m sure you already know the importance of taking in lots of fluids while you’re sick, but it is definitely one of the most vital ways to get rid of a chest cold. As gross as it sounds, fluids can help loosen up the phlegm build up in your chest that is causing you not to breathe. I stick with water, orange juice (Vitamin C) and decaf tea. (I usually go for caffeinated tea, but the other thing you’ll need lots of while you’re sick is sleep so extra caffeine is a no-go!)

If you’re looking for some great teas to help while you’re not feeling well, one of my favorite tea companies, DAVIDsTEA has some wonderful options! I tend to stick with the Calming Chamomile blend, but if you’re looking for a more specific remedy you may also want to check out Cold 911 and Throat Rescue.

To be perfectly honest, the only times I’ve used essential oils in the past has been in a diffuser because they make my apartment smell nice. I used to grab my inhaler at the first sign of a chest cold, but I’m happy to report that my inhaler has been exchanged for all natural eucalyptus oil.

I ended up using eucalyptus oil to treat my chest cold after looking up natural alternatives to an inhaler. Although I’ve been prescribed an inhaler in the past for use during chest colds and allergy season, I find myself relying on it way more than I probably should. After all, if you’re trying to sleep with a chest cold and an inhaler can give you enough deep breaths to do that who wouldn’t abuse it a little?

But the thought of constantly inhaling more medicine than the directions say to turns my stomach, so I began looking for natural alternatives– and I’ve found that eucalyptus oil actually works better for me anyway! During my chest cold I put a couple of drops with water in my diffuser, and kept a tissue with a drop or two on it in case I felt I needed to breathe from my inhaler. Even rubbing a little bit on your chest can help you breathe better!

Another way to breathe easier during a chest cold is to inhale hot steam. I started out doing this by taking upwards of 3 showers a day. After very quickly finding that rinsing your entire body in really hot water that often will seriously dry out your skin, I began looking for another (less full body) way to get my steam fix.

Humidifiers are great for keeping the air in a room moist, but for inhaling steam I found that boiling water was the best method. I’d heat up some water and put it in a bowl, then throw a towel over my head keeping the steam between the water and my face. I probably looked really stupid, but hey it worked!

Although I can get tired of chicken noodle soup after about one serving, I’ve realized with this past cold how important it is to eat light. When you’re feeling congested, even if you’re not eating anything bad for you eating heavier foods can really make you feel bloated. The one or two times I ate a full meal while I had this cold I found it more difficult to cough or get to sleep afterwards because I felt so full.

It’s common to have a light appetite when you’re sick. Unless you’re truly hungry I wouldn’t recommend trying to get your body to eat how you normally would. Stick to leafy greens, fruits, and soups. If I was feeling extra hungry I made myself egg white omelettes with toast knowing that having an actual dinner would probably make me feel worse.

Ditch your sleep schedule and focus on relaxing

Chest colds are extra tricky because you can end up having a similar feeling to an asthma attack. For me it usually goes like this: It’s whatever time I decided I was going to go to bed, but then two hours go by and all of a sudden I’m sitting up in bed coughing and gasping for air while being frustrated by the fact that I can’t sleep. 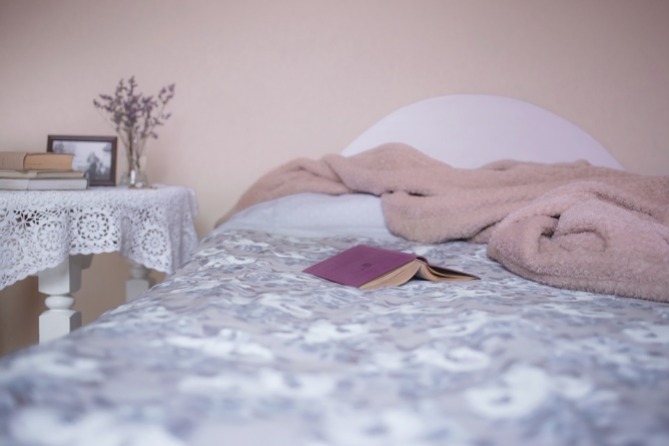 Stress can bring on asthma attacks, and while of course there is a physical component to this, so much of this situation is actually mental. If you’re sitting there worrying about how you can’t breathe, you’re probably not going to be able to breathe. With most colds resting as much as possible is the goal, however with chest colds I’ve learned to relax without trying to sleep. Once I’m that tired I’ll be able to fall asleep without being stressed out that it’s too late.

It can be difficult to ditch the sleep schedule during a work week (and even more difficult to get back on your sleep schedule once you’re feeling better) but for me I’ve found that it was worth it to not deal with my usual stressful nights while having the chest cold.

One thing I should note, is that I did take a couple of doses of Tylenol Cold just to get through the workday a little bit easier– I simply didn’t rely on medicine or my inhaler the same way I normally would have in this situation. I ended up feeling better in record time though, and would recommend the more natural route to anyone looking to kick their seasonal chest cold!

This site uses Akismet to reduce spam. Learn how your comment data is processed.

It’s Britt! I started Castle Party as a way to build a community of Disney fans and share experiences both at the parks and at home. Join the party by using #castlepartylife!
Learn more here.

🌴 sharing Disney magic from the parks & at home ✨
#castlepartylife

Let's see if Instagram's algorithm will let me rev

Happy #TangledTuesday from the prettiest restrooms